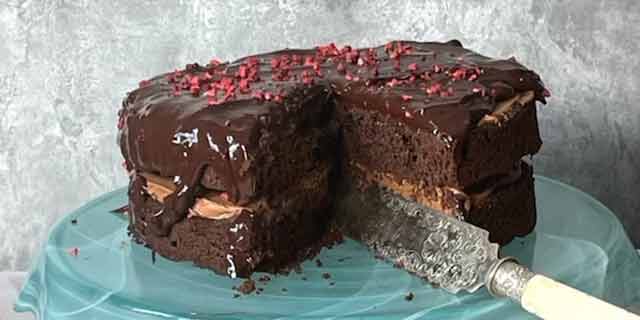 Occasionally I come across a recipe and think, “I’m making this NOW!” This was one of those recipes! It is from the incredibly gifted cook and baker, Diana Henry and was featured in The Sunday Telegraph. It didn’t last long in our house!

Preheat the oven to 180C/170C fan/gas mark 4. Butter and line the bases of two 20cm cake tins. Put all the ingredients for the sponge, apart from the milk, into a mixer or a food processor with a pinch of salt and mix until combined, adding the milk if the mixture is too stiff.

Divide the batter between the cake tins and bake for 20 minutes, or until the cakes are just coming away from the sides of the tins. Leave to cool before removing the paper.

For the buttercream, melt the chocolate in a bowl set over a pan of simmering water, then leave to cool. Beat the butter until creamy, add the icing sugar, vanilla and chocolate and beat until combined.

For the chocolate glaze, put the chocolate into a bowl and heat the cream in a saucepan until very hot – not boiling – then pour this over the chocolate. Allow to melt, stirring a little. Add the icing sugar. Leave to cool a little, but not to set.

Spread the buttercream on one layer of cake, put the other layer on top, then spread the chocolate glaze on top of this layer (or drizzle it over) and encourage it down the sides of the cake. Leave to set a little before serving.

Our Face to Face Classes have now started.  Click Here to find out more.

Category: Recipes13th July 2021
Go to Top
We use cookies on our website to give you the most relevant experience by remembering your preferences and repeat visits. By clicking “Accept”, you consent to the use of ALL the cookies.
Cookie settingsACCEPT
Manage consent

This website uses cookies to improve your experience while you navigate through the website. Out of these, the cookies that are categorized as necessary are stored on your browser as they are essential for the working of basic functionalities of the website. We also use third-party cookies that help us analyze and understand how you use this website. These cookies will be stored in your browser only with your consent. You also have the option to opt-out of these cookies. But opting out of some of these cookies may affect your browsing experience.
Necessary Always Enabled
Necessary cookies are absolutely essential for the website to function properly. This category only includes cookies that ensures basic functionalities and security features of the website. These cookies do not store any personal information.
Non-necessary
Any cookies that may not be particularly necessary for the website to function and is used specifically to collect user personal data via analytics, ads, other embedded contents are termed as non-necessary cookies. It is mandatory to procure user consent prior to running these cookies on your website.
SAVE & ACCEPT